Hey good people, recently I asked an interview for the guys of Jazz June. Jazz June is one of my favorite bands since I can remember enjoying music very much. The vocalist and guitarist Andrew Low, and the guitarist Bryan Gassler, were kind enough to answer my questions. Below the interview:

1.What bands are your medicines?

Andrew: I always like to try and diversify my music listening, so at the moment I am listening to an old Chrome record called Red Exposure, the first Audacity record, a Groove Armada song called Easy and Pentagram. As far as the bands that The Jazz June are influenced by I would say Fugazi, Superchunk, Archers of Loaf and Jawbox are bands that I always wished I could have been in.

Bryan: Dinosaur Jr., the Sea and Cake, Jawbreaker, Fugazi, Samiam and Quicksand are the ones from my youth that have stayed close to me through all these years. There are specific albums from each of these bands that administer the medicine.

2.Do you perceive many changes as artists and people from the boys who recorded They Love Those Who Make the Music and the man you are now? Which one?

Andrew: Yes. I was just saying to the guys that whilst relearning the songs that we are going to play for the CMJ shows I am having vivid memories flooding back into my brain from those times. I think I was a bit more optimistic, yet angrier at that time in my life. I think the angst growing up in the Hardcore scene really affected me back then. Also, I grew up in New Jersey so I had a lot of that suburban boredom mixed with East Coast anxiety flowing through my veins.

3.You are going to play with Braid and other awesome bands next October 19. How the audience is reacting to all these great bands from 90’s emo playing again?

Andrew: We have had an overwhelming response to the announcements that we are going to be playing shows and recording again. It is great that the music has stood the test of time and people still want to hear music from us and friends that we toured with back in the 90s, and that people are still learning about it.

4.What are the good things about being in a band that you only know if you’re in a band?

Andrew: Playing live, definitely. A lot of people who are not in bands remark that they would love to tour, but touring is actually largely a pretty boring existence. However, when you get on stage and sweat and sing with people who like your music, it is one of the best feelings in the world.

5.There are a lot of support bands playing at your gigs. Which ones really got you and you would recommend to our readers?

Bryan: Enemies and Prawn for sure.

6.The progression and different time’s signature are very current at your music. Some particulars players inspired you or it just came naturally because of all your musical influences?

Andrew: Don Caballero was always a huge influence on the technical aspect of our songs. We were all listening to jazz artists like Ornette Coleman, John Coltrane, Dave Brubeck, Miles Davis and Charlie Parker back in University as well, so I suppose that wore off on us.

Bryan: From my perspective, I would add Boys Life and Fugazi to Andrew’s list. Plus Don Cab still blows my mind to bits.

7.What are the bands plans right now?

Andrew: We just recorded seven songs with the guys at Headroom Studios in Philadelphia. Andy from Hot Rod Circuit and Sloss Minor is mixing them right now. We are either going to release them as a series of singles and split 7-inches, or record a few more and release them as an album. Hopefully we will be able to play some more gigs in 2014, but it is hard because I live in London, Bryan is in Charlotte and Justin and Dan are in Philadelphia.

Bryan: Definitely aiming to release these new songs and bring The Medicine to a proper vinyl release. Other than that, work our day jobs, be family men, play live in NYC at the Topshelf Records CMJ showcase, then get back to writing more songs and collaborating over the internet. 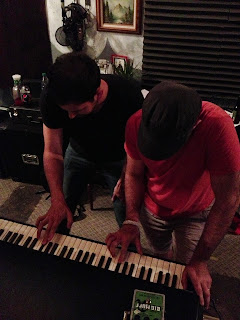 8.I think you may have read the letter that Albini wrote to Nirvana. Do you agree when he says “if a record takes more than a week to make, somebody's fucking up”? And what is the most perspectives differences between recording at 90’s and nowadays?

Andrew: I don’t know if I agree with that. I really enjoy being able to record a song and then deconstruct it, add layers and tweak things in post production over time. I guess the big difference for us is being able to record at home. For instance, with these recent songs we recorded the basic tracks at the studio to analogue tape in Philly. I then went back to London and recorded all the vocals digitally and emailed them to Andy to be added to the final mix. I was able to take my time and record multiple takes without paying hourly studio rates. In the 90s we would only have, say 4 days to do an entire record so a lot of stuff was rushed or left out because we simply did not have the money.

Bryan: I agree with the Albini statement and perceive this belief to be achievable when the band is operating full-time, rehearsed, and prepared to enter the studio to record an album. As for differences in the 90s to now, way back then we left the studio with master recordings on tape, now everything is done end-to-end in the computer and the majority of records are done at home. Interestingly enough, we used both tape and computer on our latest recordings so we are bridging the times.

9.The scars proved you something?

Andrew: This song title came about when we were touring a lot and giving up a lot of our energy and life to the band. It wasn’t always fun being away from family and friends on the road and we never made big bucks so it could be a struggle. I am not complaining, but it wasn’t all parties and beer bongs. That is were the song title came from, giving everything to the band and having the scars to prove it. This concept became relevant again when our roadie Adam had surgery to remove a brain tumor, so that is why we chose it for the name of the benefit album.

10.Thinking about all the 90’s movement, I can only remember Appleseed Cast not breaking up. Do you have some idea why this occurred to practically all bands from emo 90’s scene?

Andrew: For us, we never actually broke up, but we stopped touring and playing regularly because we had family and personal obligations that made it hard to be on the road with the band. At the same time major labels were swooping in and signing emo bands hoping that they could monopolize on the rising commercial success of the genre. This made the business a bit more brutal and we were turned off by a lot of it. It just wasn’t as much fun, I guess. I have heard a similar story with many of the bands from that era.

Bryan: I think a lot of the bands were started in college and once those university years were over, it came time to get a job and pay for that education. In the 90s you needed to be on the road to find new audiences and sell records. Most bands dissolved because touring full-time was exhausting or band members moved apart after university was over making it physically impossible to keep the band going. Plus it did get a bit lame with that whole rock-pop-punk-emo eyeliner period…

11.The band’s members had been other projects since  Jazz june stop playing. Can you tell us about what happened musically between these years?

Andrew: Dan and I were in a band called Snakes and Music for a few years. Bryan used to play with us from time to time and played on our last album, Isabelle. Justin and Bryan were in a band together called Ready to Rip. There were other projects that were involved in as well, like Bryan’s solo recordings that we all played on and a band called Wake up Dead that I started back around 2005 that still plays today.

Bryan: I have written music for at least 100 songs that no one will ever hear. I tended to just jam with musician friends of mine over the years, never aiming at anything serious because I was focused on supporting my family. Recently, really this year, I have been more motivated to turn my years of writing into fully realized songs for the Jazz June and some other projects.

12.Here, in Brazil, many people are just discovering the 90’s bands now. There are a reasonable number of people into your albums, Mineral albums, American Football, etc. And what about the new bands, which ones from the so called “emo revival” do you think that are going to make it big? (Musically speaking, of course).

Bryan: It’s nice to see this tiny little sub-genre of indie rock breaking through to a wider audience. There has been plenty of commentary on the “revival” aspect of this in the past few weeks, so I’ll keep my opinion on all of this short….Good music stands up against the test of time, let’s see who from this revival era will be left standing 5 or 10 years from now.

13.What make me love your band around 2007 (when a good friend showed your songs) is the introspective lyrics combined with really good sounds changes during the whole albums. What bands you like that has this kind of characteristic?

Andrew: Lyrically, I have always thought that Blake Schwarzenbach always put a lot of thought and effort in to writing very poetic lyrics. I have also really admired Stephen Malkmus’ lyrics for the Pavement albums. Eric Bachmann is a lyrical genius as well. Musically there are too many bands to mention that I admire. As long as someone is trying to do something outside of the traditional pop mold I have time for it.

14.It’s the last question. Really appreciate. You can say anything, save the world, make jokes. Please, if somehow one of you come to Brazil let me know and we can have a drink.

Andrew: I don’t know if you read my post on the Washed Up Emo blog about Motorhead’s Roadie, but that was probably the funniest and most bizarre things that has happened to The Jazz June.

We would love to hang with you and have a drink together. Tell every promoter you know that we would love play in Brazil for the people. Thanks for the interview.