Interview With Bag Of Bones

Adding ambient landscapes with melancholic sad lyrics, John Molfetas has been doing a great music work at Long Island. Bag Of Bones has been putting some really beautiful music, so I was really happy when John accepted answering some questions:
-
Can you please describe how New York’s emo scene is?

In recent years with emo being "revived", I think that there are more "emo" bands than ever before, whether or not they consider themselves to be part of the genre. New York doesn't have the largest emo scene, but it exists. Specifically on Long Island, I would like to shout out Haverford (http://haverford.bandcamp.com), Scout (http://scoutny.bandcamp.com), and Depressant (http://depressant.bandcamp.com). They're all great LI emo bands that we've had the honor of playing with. Thanks to Table Three Media (http://tablethreemedia.com) for booking almost all of the best emo shows on Long Island recently. In upstate NY, Sail Hatin (http://sailhatin.bandcamp.com), Oswald (http://oswaldmakesmusic.bandcamp.com), Atlas Arrows (http://atlasarrows.bandcamp.com), and Nine of Swords (thenineofswords.bandcamp.com) to name a few.

How does New York influence your music, the way you write, create?

I have lived most of my life in Williston Park, a small suburb in Long Island, NY. My town has no music scene and very few musicians interested in creating the music I listen to and write. This taught me how to work with what I have available and find ways to get things done without needing to depend on others. As I've grown older, I went away to college, SUNY Purchase in Purchase NY, and learned that my age and location is no excuse not to be making amazing music. I'm studying music recording and spend most of my free time writing, recording or listening to music; being immersed in this culture motivated me to create music as often as possible because that is the only way to improve.

How much have you changed as an artist and person from Deep Thought to Third Dimension?

Deep Thought was written and recorded over the summer of 2012. I had begun Bag of Bones a year prior as an outlet for my solo music which I had never attempted to seriously record and release. I initially began with a 6 song EP. My goal was to write and record everything but drums (I suck), which I asked my new friend Pat Linehan to perform. I never had any expectations for the music, I was doing it to prove to myself that I could. This brought the EP Buried Under the Bed which has since been taken offline (honestly, I'm embarrassed). Deep Thought was the beginning of what I consider Bag of Bones to be today. Contrary to Buried Under the Bed, I wanted to create an album that utilized as many friends as I could. I had a few different friends playing drums and asked a few of my friends who play horns or sing to contribute. The songs were recorded in a disjointed manner so there was a lot of work in mixing to make it a cohesive product. The songs developed as they went and some of the songs were completely written as I recorded.

Third Dimension was written as a whole and then recorded over a few weeks. Ben Martines, one of my best friends, performed all of the drums in one long session and I finished the rest of the guitar, bass and vocals over a few weeks, recording alone in my basement as I prefer. Things came together very easily since I knew exactly how I wanted the album to sound and feel.

Deep Thought discovered the Bag of Bones sound; On Moving On established the style and songwriting; Third Dimension gave me a chance to take a step back and play with the sound that I created.

The covers of your albums are very beautiful. How do you select the images?

Prior to Third Dimension, all of my releases feature photos I took on various toy film cameras. After finishing an album, I would go through my folder of scanned photos and choose one that fit the album's concept and sound. Third Dimension features a photo by Polish experimental photographer Rafal Karcz (http://on.fb.me/1j8OMU2). 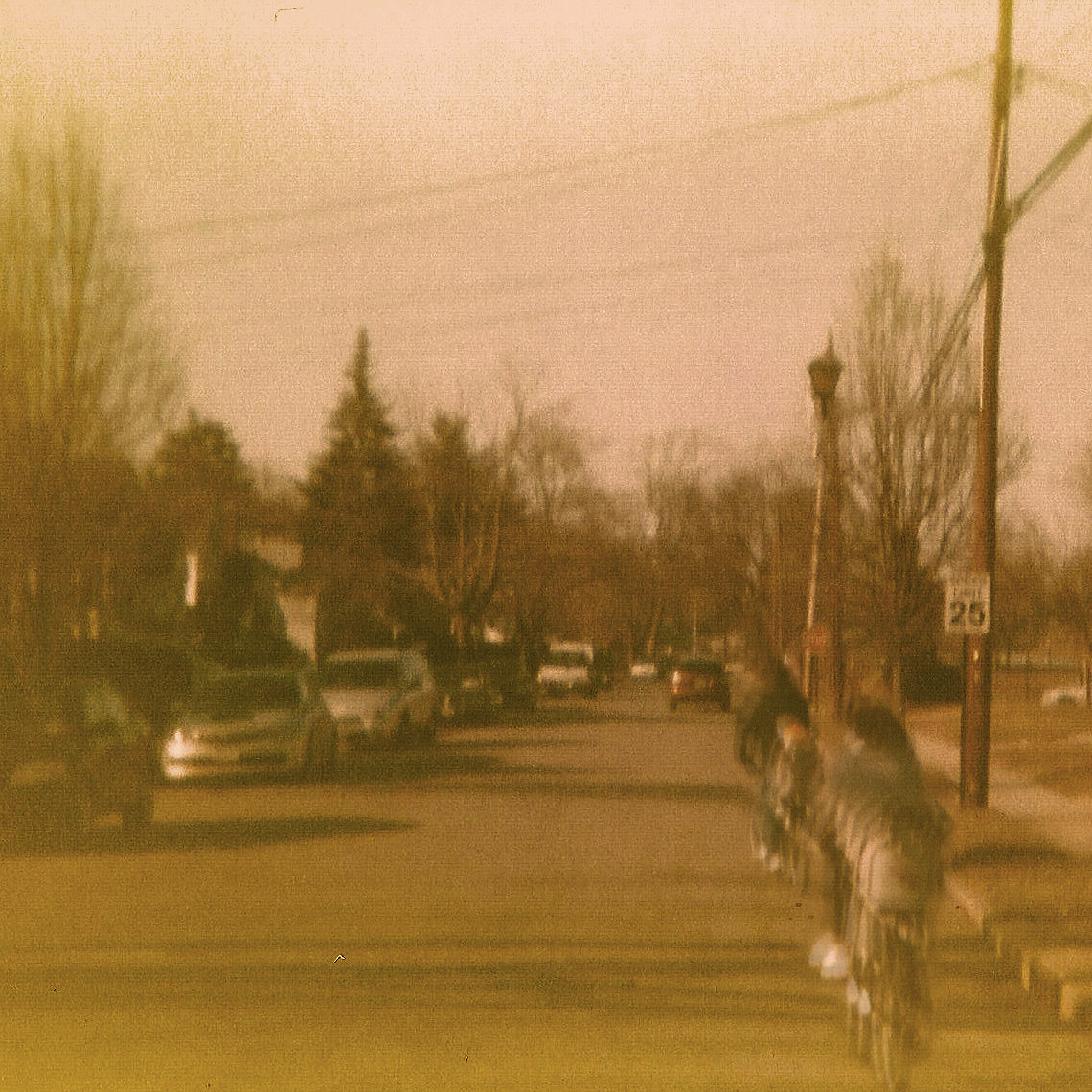 The Third Dimension sessions were the most fun of all. Ben and I had basic ideas for all the songs, so we took a day to write and record all of the drums. It was very painless except for a few moments on the album. Everything that I performed was recorded in my basement alone because I tend to be a perfectionist when working on my own music. The rest of the horns and vocals were recorded at random times when a friend was over my house or had a free hour or two to contribute something. It is the most fun to record when you don't have to focus on the big idea of the record and can take the time to focus in on the subtleties.

"Ambient" is sure at your works. How did you "discover" it and thought "whoa, it's really good"?

I have always loved ambient elements in non-ambient music but have had a hard time enjoying straight ambient/noise music. I would consider the first "ambient" record I fell in love with to be "Fi" by Bibio. This record has a beautiful atmosphere and blend of acoustic and electric elements. I drew a lot of influence from this album on my earlier Bag of Bones works, We Wasted All of Our Lives and Buried Under the Bed. I love to use ambient elements in my music to further paint the picture of a song's mood and depth.

How are your live presentations?

The Bag of Bones live band is still developing and evolving, especially since we haven't performed any shows since the release of Third Dimension. The live band consists of guitar/vocals, bass and drums. In the past, our live shows have been a simplified version of the Bag of Bones recordings. With these new songs, I would like to give the live versions their own identity and create something special to give purpose to our live performances. If you catch us playing a show this summer in the US, expect some experimentation with live instrumentation and a performance rather than a collection of songs.

You are very productive, so many releases in the last three years. Do you sometimes have creative blocks?

Always; but I don't get hung up when I have writer's block. I'll do something else and come back to it when I feel inspired again. Some people convince themselves that they have a creative block but it only perpetuates it. Focus on something else and inspiration will come from that. My perception of life inspires my music so I feel that as long as I continue to experience life and react, I will continue to create music.

What bands are your medicines?

There are way too many bands to list, but to list a few: Brand New, American Football, Glocca Morra, Algernon Cadwallader, The Brave Little Abacus, Alex G, Into It. Over It., Julie Doiron, toe.

The past week or two I've been listening to a lot of The Promise Ring, Two Knights, Marietta, NOUNS, and Mac DeMarco.

Do you still listen the bands you were hearing when you got into music?

Unfortunately not. I wish that music could always have the same meaning to me, but lots of those bands only hold a nostalgic place in my heart. I can always revisit their music and appreciate it, but it just doesn't sound the same as it did back then. I look for new music like some people read the newspaper.

To list some of those bands that got me into music: Brand New, Taking Back Sunday, Red Hot Chili Peppers, Rage Against the Machine, Thursday, and a bunch more that I can't remember right now.

Being your own composition, how do you explain it to the other musicians who’ll play the songs?

Right now the band consists of me, and my friends Ben Martines (drums) and Nick Filippi (bass). Ben performed and wrote all of the drums on On Moving On and Third Dimension, the two records which we perform from live, so he knows the parts already. It isn't too difficult explaining the parts to Nick, it just takes some time with us playing together in order to sound uniform, as with any band. I do wish that I could expand the band to include more members and instruments in order to sound more like the Bag of Bones records, but with the limited number of musicians that I know that are interested/able to perform my music, it is difficult for me to find a good fit. It would be a lot easier if the songs were written as a band instead of by myself, but this is what gives Bag of Bones its sound.

What are the mainly changes from “On Moving On” to your new record?

In terms of concept, On Moving On was a record thinking the world sucks, feeling self-conscious and trying to understand how to go from being a child to an adult. Third Dimension realizes that the world definitely does suck, but I'm done complaining about it. Instead, I'm finding my own comfortable place in the mess and actually starting to move on and experience this three-dimensional life with its endless intricacies and interactions.

Thank you! Please, if you want to; leave our readers a final message.

Listen and download to all of my released music for free at: http://bagofbones.bandcamp.com/